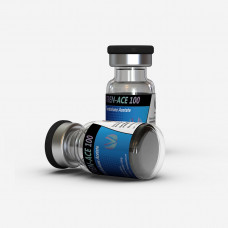 Trenbolone is a chemically re-arranged structure of the compound nandrolone, which, of course, means it is a 19-nortestosterone, with a carbon atom removed at the nineteenth position.

However, this Finaplix steroid has also been chemically changed by the addition of an extra bond at the 9th and 11th carbon junction.

This drug was initially developed for veterinary use, where it was designed to boost the lean meat of livestock.

But, the result of the above arrangements mean that a typical Trenbolone Acetate injection doesn’t cause estrogenic effects on the body and greatly increases the binding of the compound to androgen receptors.

All of these effects lead to an extremely powerful anabolic and androgenic agent that has become the most highly coveted substance in both sporting performance and aesthetic circles.

This is due to the highly desirable effect the compound has in being able to boost lean mass to a large degree while also minimizing unwanted effects such as fat storage and water retention. The acetic acid attachment allows for relatively quick release as well, with a half-life of around 3 days.

However, Trenbolone Acetate’s price is an increased risk of certain adverse effects and a highly unreliable compound in this regard.

Below, the uses of this substance, along with the possible impact it can have will be discussed.

What Is Trenbolone Used For?

As stated above, Tren Acetate was originally designed for the sole use of livestock consumption. However, roughly around the 1980’s, this substance was touted to have been included in some aesthetic athletes’ drug cycles.

This was done through the use of veterinary injectables, or, more recently, through adapting Finaplix pellets for human use, or by manufacturing the compound through underground labs.

This substance is commonly used by many athletes for added strength, power or lean mass. But, its use is generally limited to 6-8 weeks for reasons discussed below.

Trenbolone 100 mg is a typical weekly dose for performance enhancing purposes when using an injectable form, or a daily dose when taken orally. This increased oral dosage is due to a decreased bioavailability of Finaplix pellets to humans when consumed through oral ingestion.

Trenbolone Acetate is enjoyed by many athletes for reasons similar to all other anabolic agents.

However, the lack of an estrogenic effect on the body, as well as the powerful nature of the drug means it is ideal for athletes who need to only increase lean tissue and promote strength while keeping their overall weight down.

“Tren ace”, as it’s sometimes known, has a very strong binding affinity to the androgen This increases the strength of the interaction between these receptors and the subsequent effects. This includes boosting protein production and promoting its retention in the body, receptors in the body, and an affinity five times stronger than other standard performance-enhancing substances to increase muscle cells and the satellite cells surrounding it.

It may also have the unique benefit of increasing Insulin-like Growth Factor 1 (IGF-1), which can further promote hypertrophy, recovery and strength.

It might also have the ability to bind to glucocorticoid receptors and prevent cortisol from taking effect in the body. Considering that these chemicals can have a role in promoting fat storage and increasing hunger, this can also be beneficial for aesthetic or sport enhancement.

Tren 100, as the name implies, provides a 100 mg dose of the compound in an oil-based solution for every 1 milliliter of solution. This makes it an ideal and convenient solution for individuals who are using the substance for performance or aesthetic goals.

How To Take Trenbolone Acetate

Trebol 100 is held in an oil-based solution and can be taken via intramuscular injection. This means that it can be administered through the usual routes of similar drugs.

A Trenbolone injection can be taken through the usually reported sites of the lateral deltoid or the glutes by using a sterile hypodermic syringe.

Injectable Trenbolone steroid is usually taken in 2-3 doses per week to accumulate in a total potential dose of 100 to 300 milligrams per week, for most athletes.

Another benefit of Trenbolone Acetate is that it’s a very versatile drug. It’s extremely powerful nature means that it is possible to use in training cycles where the goal is to maximize mass, especially lean mass.

However, a Trenbolone Cycle for cutting is also very effective, due to its lack of estrogen-related effects on the body, which means that fat storage and water retention from the drug’s use is eliminated. This allows for maximizing muscle retention when reducing overall weight and, in some cases, preparing for competition.

Best Tren Acetate cycle is largely based on opinion But, the use of the substance during cutting cycles is reported to be the most popular. Nevertheless, this compound can easily and successfully be used no matter what the goals of your training phase are.

What To Stack With Trenbolone Acetate

Trenbolone, despite being a useful drug on its own, or along with a simple testosterone addition, is usually combined with other anabolic compounds.

This is done in an attempt to further increase the results obtained from using any one drug alone, which is known as “drug stacking” in aesthetic groups.

Tren Acetate has been reported to be included in such mass-gaining, or “bulking” stacks alongside Anadrol, Dianabol and esterified testosterone.

Meanwhile, when looking to maximize fat loss, drugs like Winstrol, Anavar or Primobolan have also been combined with a Tren injection.

It should be noted though, that including additional compounds to any drug cycle also substantially increases the risk of adverse effects from both the drug being used and unique effects from the interaction from the multiple substances in the body.

Despite being favored for its lack of some estrogenic effects, a Trenbolone Acetate injection still carries the risk of multiple adverse effects. In fact, it has been reported as a very unpredictable compound for causing an array of negative interactions in the body.

Tren Acetate 100 carry most of the common adverse effects of similar agents, which includes:

So, while this drug may be a popular choice, it is also a very unpredictable compound which can have a host of adverse effects which must be considered before its use in order to maintain your health and safety.

It should also be noted that some effects, like those estrogen-related, can be prevented with the use of a Selective Estrogen Receptor Modulator (SERM). However, some others cannot be managed as well, like the androgen-related effects.

What Is The Difference Between Trenbolone Acetate and Enanthate?

As mentioned above, Trenbolone Acetate is one of the more popular compounds for athletes looking to boost their performance and their physique. However, like similar agents, there are also other esters attached to the Trenbolone compound.

The enanthate, or enanthic acid ester, can also be added to the chemical to create another popular form of the drug. This form is commonly nicknamed the Trebol anabolic steroid.

While the basic effects, and the strength of those effects, are the same between each type, but the rate of release is significantly different.

So, for a slower-releasing compound, the enanthate option may be useful. This longer life also means fewer injections would be required which would have a consequent decrease in the risk of issues like soreness and injection site infections.

However, if you’re looking for a fast-acting version of this drug, which may assist in maintaining peak amounts and may achieve slightly better results, particularly during a cutting cycle, the acetate form may be more desirable.