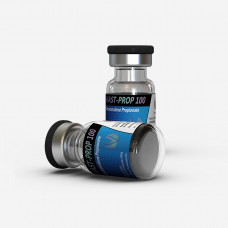 Drostanolone Propionate is a popular compound used by many individuals for a range of therapeutic, aesthetic and performance related purposes.

Both Masteron Propionate or Enanthate are popular forms of the substance that contain the same active ingredient, with the only difference being the chemical delivery agent that is attached, which controls the rate at which the drug is released into the body after administration.

The Drostanolone compound itself is a modified form of Dihydrotestosterone, or DHT, which has been altered with the addition of a methyl group at the 2-carbon alpha position.

This means that the Drostanolone 100 mg dose provided above will be protected from breakdown by enzymes in the muscle, and cannot be converted into an estrogen like many similar substances.

This leaves the compound free to interact with androgen, and related secondary receptors in the body to increase protein production and retention, along with increasing cell content in the muscle.

All of these interactions help provide the benefits such as increased lean mass and sporting performance sought by most athletes who use these types of drugs. But, unlike other compounds, Masteron 100 is also markedly less androgenic, which reduces the risk of some adverse events associated with other similar compounds.

How To Use Masteron Propionate For Bodybuilding

Masteron Propionate is a faster releasing form of the Masteron substance than that of the enanthate or other variants. This means that it reaches peak levels in the blood faster and is a little easier to maintain at maximum levels.

The Propionate delivery agent has a half-life of 4 to 5 days. This means that the highest level of the substance will be achieved at around 2 days. So, when looking to achieve a constant state of maximum levels, the compound would be administered every second day.

This is along with the impact, or lack thereof, that the main compound has on the body. Because this drug is a DHT offshoot, it has no estrogen-related effects on the body, which means that water and fat storage is minimized with use.

Its lower androgenicity also means it will not encourage as much rapid size gain as with other substances. It also makes it a more tolerable compound than others for female athletes who are looking to boost physique or performance.

These elements make Mast Prop an ideal substance for cutting cycles, where the objective is to maintain as much lean mass, and consequent fitness levels, as possible when reducing your overall weight.

However, it also means that it will not be as useful for athletes who are looking to rapidly increase their size or power, as there are other compounds that will serve this goal better.

It could be somewhat useful though, in a “lean bulking” cycle, where the goal is to gradually gain size without concurrent increases in water and fat storage.

A longer use of this agent relative to other substances is also permitted, due to its more tolerable nature of the drug.

As such, the use of Masteron in a cycle lasting 6 to 12 weeks, as opposed to around 6 to 8 weeks is not uncommon, particularly during an off-season, or lean bulking cycles.

Drostanolone Propionate, while effective for the appropriate training goals, is almost never used alone. Its use is usually combined with other drugs in order to maximize the progress towards the goals of the cycle. This is called “stacking” or a “drug stack”.

One of the staple substances used alongside compounds like Mast Prop 100 is Testosterone Propionate. This is because the use of Testosterone is required due to a drop in natural production that will occur with the use of most of these drugs, as well as the added benefit to performance and physique it affords.

So, when using these two drugs, it’s important to know the differences between these two compounds and how they can be used separately or when combined.

Masteron 100 mg and an equivalent dose of Testosterone Propionate both operate in a similar way in the body. But, because of how each is structured, and due to certain chemical reactions with each, the latter compound is much stronger for building lean tissue.

However, this added strength also comes with higher androgenicity and estrogen-related side effects.

The fast release from both compounds though, allow for an easier time with keeping both substances at top levels within the body, which is again useful for when you are dropping weight.

Dosages For Beginners And Advanced Athletes

Drostanolone 100 mg that is provided in every milliliter of injectable solution is a more conservative dose, which will likely have to be increased for anyone other than complete beginners.

This is because the 100-milligram dose of Masteron Propionate is a therapeutic dose, although this dose may also be ideal for female athletes who are looking to boost physique or performance, as virilising side effects will be uncommon.

However, for male athletes looking for a benefit beyond therapeutic measures, the dose of Masteron (Drostanolone Propionate), will commonly fall within 200 to 300 milligrams for beginners, and around 400 milligrams or above for advanced users.

The higher dose for elite level practitioners and experienced users is necessary because they have a greater amount of androgen receptors.

Alongside this, they will also need a higher stimulus to continue progress towards their goals, as they are closer to their genetic limit for muscle growth and athletic performance.

Nevertheless, doses should always be conservative, and increased with caution, as raising the dose of any of these types of drugs will inevitably increase the risk of adverse events.

How Does Testosterone Propionate Stack With Masteron?

As already mentioned, a common substance that is combined with Drostanolone Propionate is Testosterone Propionate, and, due to the two esters have a similar pattern when releasing the drug into the body, these two compounds are fairly in sync with each other.

This synchrony, along with the relatively friendly and well-tolerated nature of Testosterone and Masteron, along with the former’s necessity due to a reduction in natural production when taking the latter, makes the combination of the two drugs ideal.

In fact, Masteron Propionate 100 mg doses can be useful, even in more advanced users, when combined with a sufficiently high dose of Testosterone.

So, the combination of these compounds should be considered, particularly when in a cutting cycle. It should also be noted though, that combining the use of more than a single compound in a given cycle will always increase the risk, and unpredictability, of adverse events occurring.

This is due to a higher overall dose being administered and interactions of the drugs relative to each other in the body. The potential risks of each substance and their interactions should be studied carefully before a decision is made.

Below, the risks present in the use of this drug, along with any necessary precautions that should be taken, are discussed.

While Drostanolone Propionate is one of the more friendly and well-tolerated substances available, it nonetheless still carries the risk of undesirable effects. As stated, the risk of these effects will see with increased dosages and the combination of other compounds.

The side effects of Dromostanolone include:

Along with this, this drug’s use may also increase arterial stiffness and increase the size of the left ventricle in the heart, all of which increases the risk of high blood pressure and subsequent cardiac events.

The androgenic effects of Drostanolone Propionate include oily skin, acne and the acceleration of baldness in predisposed individuals. For women, as mentioned, virilisation, which is the development of masculine traits, is also a risk.

This is why it is highly favorable to include the use of an esterified Testosterone to offset any potential adverse event associated with low levels in the body, along with the further benefit to aesthetics and fitness it will provide.

While a single dose of Masteron 100 is not likely to elicit any significant level of the above effects, there may be a small percentage of sensitive individuals who could experience the above events, even at low doses.

Also, androgenic effects cannot be further managed by the inclusion of a 5-alpha-reductase inhibitor, such as finasteride, as the compound is a DHT offshoot. This stands in contrast to many similar agents and is an important consideration for those worried about the above effects.

So, before the purchase of this or any other anabolic agent, it is always important to note any potential negative impact of the compounds, so you can better manage them and utilize them to maximize the results you get from the drug.