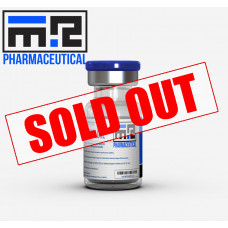 The Nandrolone drug is a very well-renowned substance among sporting and aesthetic circles. This is because of the ability it affords the user to very rapidly accrue a large amount of size, with the majority of this size stemming from lean tissue increase.

This is because the change this chemical has undergone, namely the removal of a carbon atom from the 19th point, means it is processed differently in the body and has a slightly more powerful impact on the body when compared to its parent compound. It also has a reduced chance of some undesirable events happening with its use.

The Nandrolone Decanoate 300 mg preparation seen above, will supply a 300-milligram dose of the agent in every millilitre of solution, which is usually the most common dose for users looking for aesthetic or fitness-related gains, with more common users sometimes using a higher dose again.

This solution is taken as a Nandrolone Decanoate injection, which is usually injected in common intramuscular sites such as the lateral deltoid, at the side of the shoulder, or through the gluteal muscle in the buttocks.

As with many of these substances, however, the acquisition of this agent is very difficult, if not impossible, through traditional vendors, like pharmacies, due to heavy government restrictions. So, it is important to find a good steroid source from which to obtain the drug, taking care to avoid fake versions and low-quality products through consulting independent reviews and online forums before purchase.

As mentioned before, there are a range of Nandrolone Decanoate benefits that make it an ideal choice for people looking to improve their size or certain aspects of their fitness.

Specifically for these people, a weekly dose of 300 mg of Nandrolone should provide:

As well as the above perks, Deca 300 also seems to be well tolerated when used alongside other agents. This combined use is common among users, and some have reported better effects than when any one agent is used alone.

For example, when the maximum accretion of size is the primary goal, many have been reported to combine this chemical with agents like Sustanon 300 to further amplify the perks seen above.

However, it should be noted that the combination of different substances can make unwanted events, discussed further below, more likely and unpredictable. So, when using this practice, a careful approach is always warranted.

While the use of Deca 300 is supposedly a relatively more tolerable experience than the use of some of its counterparts, there are still a number of undesirable events that, while unlikely or relatively mild with responsible use, are still possible.

These undesirable issues associated with Nandrolone Decanoate include:

But, as said, while the above events can all happen with Nandrolone, the chances of happening is still relatively lower than with other agents.

It should also be noted that the management of the above issues, like the acceleration of adipose tissue and fluid storage, can be managed with the use of some ancillary agents.

However, the use of ancillary agents to manage the balding or virilizing impact of the chemical will have the opposite effect, making the impact worse. This is due to the unique process by which this agent is processed when examined next to other, comparable substances.

These factors should all be taken into account when seeking to purchase the agent to ensure you get the most out of its use with minimal chance of undesirable events.