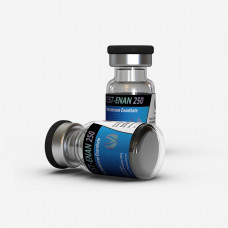 A Testosterone Enanthate injection is easily one of the most widespread compounds in the world for athletes seeking to boost aesthetics or fitness.

This substance is a slightly modified form of the same chemical that is found produced endogenously inside the body. The addition of a chemical delivery agent, in this case an Enanthate injection, helps manipulate the absorption of the compound into the body and its subsequent use by the body.

Called Test E for short, this substance works in the body through binding to androgen receptors, as well as secondary receptors.

This causes a range of signals to be sent within different cells in the body, the main outcomes of which include increasing protein production in the muscle, improving its retention in the body and even increasing the amount of cells the in the muscle and surrounding it, known as “satellite cells.”

Testosterone Enanthate 250 is a mixture of the drug that holds 250 milligrams of the drug for every milliliter of injectable solution, which is a dose sufficient to provide benefits for athletes who are looking to boost their fitness or aesthetics.

What Is Testosterone Enanthate Used For?

Testosterone Enanthate, as already stated above, is used by athletes to boost their strength, power, speed and, for aesthetically-focused athletes such as models and aesthetic athletes, to raise muscle mass and decrease fat more so than would be possible naturally.

But it can also be used for a variety of therapeutic uses in illnesses that cause atrophy, growth deficiencies, or in the recovery of major surgeries.

More specifically, Test E 250 is usually used during phases when the main objective is to accumulate size and strength, known more commonly as "bulking cycles”. This is because of the slower absorption of the compound into the body, which permits for a longer, and more comfortable, period of use.

However, the substance can be, and is, also used successfully when an athlete is looking to maximize the retention of lean tissue and fitness when reducing overall weight, a period known as a “cutting cycle.”

But, in these cycles, faster releasing versions of the compound are preferred, as they can help maintain peak levels of the drug in the system more easily.

How To Inject Testosterone Enanthate

While there are preparations of this compound that can be taken orally, a Testosterone Enanthate injection is usually the preferred method of taking it.

This is because injecting the compound allows for a greater degree of control over its active levels in the blood stream, a slightly higher amount of bioavailability and a better ability to combine different substances if desired.

So, those administering Testosterone Enanthate 250 would do so through an intramuscular injection through one of a few different sites on the body, most commonly in the buttocks, or glutes, or on the side of the shoulder, in the lateral deltoid muscle.

The Enanthate 250 mg version of the drug, as already stated, will have quite a slow release into the body once injected, with the compound reaching its highest levels in the body within 24 hours after administration and reaching half its potency in the body at around 7 to 10 days.

This allows for a more gradual level of activity in the body and reduces the need for many administrations throughout the week, as is usual with other forms.

This can help reduce the occurrence of some adverse events correlated with a high injection frequency, such as soreness and injection site infections.

As mentioned in the first section, there are many benefits to the use of Testosterone Enanthate, including therapeutic and athletic benefits.

As such, the administration of Test E can help improve strength levels, which, in turn, will enhance power and speed, along with boosting muscle growth.

It is worth noting that, for increasing lean tissue, this will be seen to a greater extent in the upper body musculature than in the lower body, though a large amount of growth will occur in both regions.

This greater growth is observed because there is a greater content of androgen receptors in the upper body which can be used to activate the effects of the drug.

Along with this, when the compound is administered, it can be converted into estrogen if certain inhibitory compounds are not taken, which will increase water retention and fat storage in the body.

This is another reason this substance is useful when the goal is to maximize the amount of size you wish to gain.

So, the use of a Testosterone Enanthate 250 injection holds many benefits. But these are context-specific, and the compound undoubtedly has a larger benefit to some athletes and training goals, than others.

These should all be considered before purchase to ensure you make an educated decision and receive the maximum amount of benefit from the substance’s use.

Testosterone is a relatively powerful drug, particularly for those who haven't used supraphysiological doses of it before.

So, beginners who are just starting out in using these types of substances will not need as high of a dosage as more experienced users. This is because individuals who have used these types of compounds on a regular basis before will have a greater amount of androgen receptors in the body.

They will also likely need a higher stimulus to maintain progress towards their goals, as they would be far closer to their genetic limit for fitness and size than a novice or beginner user.

So, for beginners, a weekly, or twice weekly injection of Test Enanthate 250 mg for a period of around 6-12 weeks, should deliver satisfactory results. However, for more experienced athletes, this dose could go as high as 1,000 milligrams or beyond.

It should be noted, though, that increasing the dose of this drug, like with many of its counterparts, will increase the risk of undesirable effects. So, a conservative approach with an Enanthate injection should always be taken.

Testosterone Enanthate, like many other anabolic agents, carries the risk of potentially undesirable effects. As mentioned above, while none of these events are guaranteed, increasing the dose of the compound taken, or combining substances.

Nevertheless, the potential side effects of a Test Enanthate 250 injection include:

It can also increase the stiffness of these blood vessels and increases the size of the left ventricle of the heart, all of which can raise the risk of a cardiac event.

These include water retention, which can also raise blood pressure, and a higher amount of fat storage. The occurrence of gynecomastia is also a significant risk factor, particularly at higher doses.

These events include the occurrence of oily skin and acne, as well as an acceleration of baldness in those who have a disposition to the condition.

In women, this can also cause virilization, which is the development of masculine traits like a deep voice, facial hair, a squarer jaw and clitoral enlargement.

While it is important to note the potentially undesirable effects of a Testosterone Enanthate injection, there are means of managing some of the above effects.

So to lower the risk of androgen-based events, a 5-alpha-reductase inhibitor such as finasteride, which blocks the enzyme that converts the substance to DHT, can be included.

The same can be said for estrogen-related effects, which can be prevented by either including an aromatase inhibitor, like anastrozole, which will prevent the compound from being converted to estrogen.

Or, you could include a Selective Estrogen Receptor Modulator (SERM), which will prevent the converted estrogen from causing their adverse events.

While there are some secondary events possible with the inclusion of this drug, the main stock of these may be prevented or treated with the correct use.

What Is The Difference Between Testosterone Enanthate And Cypionate?

Testosterone Enanthate 250, as already said, holds a chemical delivery agent which helps control the breakdown of the substance, with a half-life of 7 to 10 days.

The Cypionate version of this substance operates in the body through the exact same mechanisms, but has a different release time, with the Cypionate half-life lasting approximately 8 days.

So, Injectable Testosterone Enanthate can last in the body for a longer period and allow for a more sustained release into the body.

This may be the main cause behind the fact that, even though the other variant can be a popular option amongst athletes, Test E remains a staple drug in many cycles.